Spoiler: Must have read book three of A Song of Ice and Fire and/or watched Game of Thrones episode nine "The Rains of Castamere"to proceed. 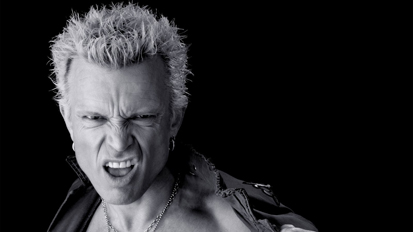 Billy Idol (who knows a thing or two about weddings, but had the color wrong on his 1982 hit) was one of two things running through my head throughout the weekend, leading up to Sunday night's "shocker" episode of Game of Thrones (his facial expression above is apt for this post methinks).  No surprise the other was "The Rains of Castamere" in a low baritone (I imagine it as sung by Leonard Cohen - Listen to "Waiting for the Miracle" on the Natural Born Killers soundtrack...  go ahead, I'll wait).

WinterIsComing.net created two versions of recaps of the episodes; one for those who have not yet read the books (those who have not read the books are aptly called "the Unsullied"), and one for those who have read the books ("Sullied").  I would fit into the latter category, thus explaining the quotes around the word "shocker."  There was little doubt the episode would contain the long-awaited "Red Wedding." In each season, episode nine contains the "big reveal" of the season (Ned's head, Blackwater), and season three is no different (will Season four wait until episode nine to off @)(#*()32@#?  (doubt it).

As a Sullied individual, I went into this episode with certain expectations.  This was derived from the gut-wrenching impact the Red Wedding had upon the first reading (even that first line of the chapter, "The drums were pounding, pounding, pounding, and her head with them" elicits such uneasiness).  I expected to be brought on the emotional roller coaster of anticipation, dread, shock, and sadness.  As I've mentioned earlier, I am prone to outbursts of book snobbery, but accept certain changes as necessary for the change in medium.  There were a lot of changes in this episode.

So, did "The Rains of Castamere" deliver? 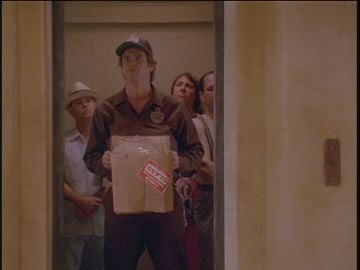 At the beginning of Ace Ventura: Pet Detective, Ace is delivering a package disguised as an H.D.S. delivery man.  This of course is an elaborate ruse to rescue (dog-nap) a pilfered pooch (we don't learn that until later...  which is mostly after my point - yes, I promise there is one of those in here somewhere).  So, he's carrying the package, like a delivery-person is apt to do, by more or less destroying the package and it's contents (I think Ace delivered the swing set I ordered for CrabCakes and Peanut based on the difficulty to assemble said set...  but that's a story for another time).  However, upon delivery, the box is intact enough for acceptance - and here is where the woofy wackiness ensues.

Game of Thrones was like the delivered package.  The box was damaged and everything inside was shifted or broken and not exactly in the order I was expecting things to be, but the overall contents of my order were present.  This is not painting the best of pictures, so before going further I will state that I did enjoy the episode. 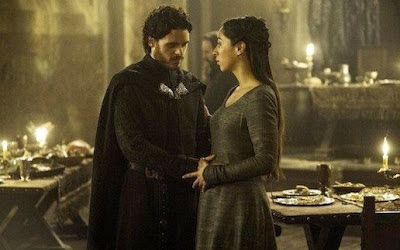 One of the most controversial changes in the series was the replacement of Jeyne with Talisa, a character with a background and feelings.  This change became most prevalent at the RW, wherein Talisa was present (Jeyne did not attend the wedding - leading many to speculate that Jeyne is carrying a wolf pup who could later sit the Iron Throne).  But Talisa attended the wedding, with the proverbial bun in the oven, and it is with Talisa that the massacre begins (stabbed in the baby - who was potentially to be named Ned Stark, repeatedly - and Ned Stark is killed again!).  There were theories that Talisa was a Lannister spy and would wind up as a conspirator in the RW.  Reading that theory, even though I didn't really believe it, made this scene all the more hurtful.

The massacre continues as in the book; crossbow bolts, knives, "the Lannisters send their regards" (though it was "Jaime Lannister sends his regards" in the book).  Jinglebells or whatever Frey's lackwit son was called is replaced with Walder's wife - acceptable; one less minor casting decision/explanation needed - throats are slit.  Cat's reaction changes from mania (in the book, concerned about her hair as Ned loved her hair) to catatonia (stillness done well can show loss of all hope - and Michelle Fairley ran the emotional gauntlet through the affair).

So, there was one band that played well and not a ton of terrible musicians (because they were really marksmen), and The Rains of Castamere is played clearly, not mixed in with the rabble, and Robb died for love - not honor like his father, and maybe the affair was a little rushed - there's a lot of other story lines to get to!  The RW wasn't perfect - but will the portrayal in a new medium ever meet the expectations you create when the entire scene is visualized your own way, as happens when you read it?  So, the packaged wedding was a little dinged up, maybe a piece or two broke, but everything was there.  And as the silence of the credits rolled, I still had that gut-wrenched feeling of FUCK (wonder if that's the first curse I've written on this - quite possible - and it fits).