Goodreads synopsis can be found here.
I got to be one of the lucky ones to get an ARC for The Skull Throne, thus shortening my wait to continue the saga (if only by a few weeks).

I haven't reviewed the previous Demon Cycle books. In (not so) short... if you haven't read them, stop reading this, get in the car, drive to your local bookstore, purchase all the books (heck, get two copies and give one set to your friend who also (for some bizarre reason) hasn't read them yet), and get reading. Now. Right now.

Review: (fear not, no spoiler for the end of The Daylight War mentioned) 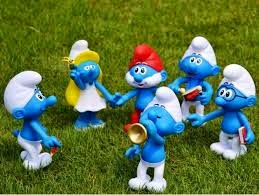 Growing up I happened to have quite the collection of Smurfs (as any child of the 80's should be able to confess to). I just loved the Smurfs and the world they inhabited. Gargamel and his insidious plans to capture the little blue guys, Smurfberries, Azrael (all bad guys need some comic relief), the clever naming scheme (good thing mom knew Brainy would be so smart). I had the toys, watched the cartoons, bought the clay kits to make your own Smurfs (though those were never the same as the store-bought ones). I was a Smurfs fan. It was all just Smurfin' Smurftastic.


The cartoon brought a lot of life to how I would play with my ever-growing collection of Smurfs. You see, there was the over-arching plot from the TV show of Gargamel and whatever nefarious deeds he deemed necessary to capture and use the magical miniatures. I would carry that ploy into my playtime, but that was just never enough for me. So, what did I do?  Well, there had to be some additional turmoil in Smurf Village as Brainy looked to remove Papa Smurf from his seat of power. There was backstabbing as the Smurfs vied for the attention of Smurfette or over control of the Smurfberry hoard. Fights and turf wars broke out. Smurfs died (I was a weird kid). But to me, having that extra story, that additional background and motivation for each of the Smurfs served to enhance the overall story of whatever Gargamel was doomed to fail at on the next week's episode. 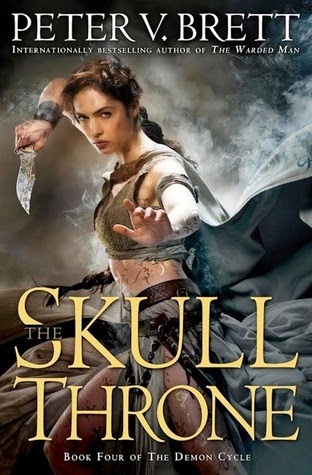 My gut tells me Peter V. Brett (Pete? Peat?) may have had a similar childhood to mine (at least toy-wise anyway). Maybe not with Smurfs per se (maybe it was GI Joe? He-Man? Transformers? Voltron? Did that too. And brought them all together to take out the Ninja Turtles. But that's besides the point). But the belief that there needs to be more to the world than the basic plot set forth in the earlier novels is clearly evident in The Skull Throne. Hell (or maybe that should be "Night"), the role of demons in this Demon Cycle novel is significantly less prevalent than any of the other books (that's as close to a spoiler as you're going to get from me). So, while this may not be the book you were expecting (isn't life better that way anyway?), it certainly adds quite a lot of flavor to the Demon Cycle world. You'll laugh, you'll cry, you'll have a bunch of other typical review-mentioned emotions, you'll Smurfin' curse Pete's name (again) (I didn't really mean it Pete, but...  shakes fist).

The Skull Throne amps up the political intrigue and espionage, deep-dives into character development, and demonstrates that the decisions one makes can have lasting repercussions.

Pete takes Smurf Village, turns the mushroom kingdom on its head, dissects it, removes its organs, moves the bits around into new, bizarre formations, and puts it back together in a way that will make the end product something to behold. Book five can't come soon enough.