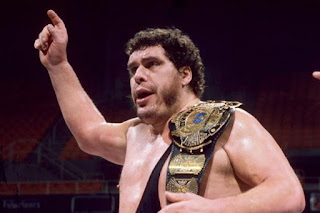 I have been following Delilah Dawson on Twitter (@DelilahSDawson) for a long time, and yet I had never read any of her books. As such, I was terrified to pick up Wake of Vultures by Lila Bowen (pseudonym for Delilah Dawson). Terrified, and it's all André the Giant's fault. Let me explain.

When I was a child, I loved wrestling (back when the WWE was the WWF, and wrestling was all about crazy make-up, over-the-top (and somewhat offensive) themes, and managers helping with the occasional chair thrown into the ring). Yeah, it was just a stage show, but I ate it up.

Half of my family had moved out of state when I was a babe. We took many trips to visit them. On one of these visits, little Doug was walking through the airport holding onto daddy's hand, and who is sitting but a few feet away? André the Giant. I had to hold back my inner Butabi. I was young, awkward, shy, there was no way I would be going over unassisted by a grown-up to say anything to the man.


But my dad knew my love of the big men "beating" on each other for sport. He took my little hand and prepared to walk me over to ask for an autograph. Someone got there first, a guy older than me (I was just a little thing) but not ADULT ADULT aged, and Mr. The Giant FLIPPED THE F**K OUT on the dude. I can understand as an adult now that there's some hassle to fame, and chances are that wasn't the first person to "bother" him as he wait for his flight. Maybe not the second, or third, or fourth. But little me just couldn't understand. DEVASTATED.

Never meet your heroes? Someone said that.

As I said in the beginning, I have been following Lila/Delilah on Twitter for some time. I'm pretty sure I've mentioned on here before I'm writing. Currently approximately 90,000 words into a projected 130,000 word novel, and Ms. Dawson has been (and continues to be) incredibly helpful with writing advice. She constantly tweets out stories of her own struggles in the process, tips and tricks, query advice, even advice on quasi-related things like self care, etc. etc. etc. etc.

So, why was I terrified to pick up one of her books? It's meeting your hero. What if it's bad? What does that say about all the advice I'd been absorbing into my own processes for so long? What if...?

Chapter One alone gave me cause to rethink my novel opener. Wake of Vultures was captivating from the get-go and was unrelenting from there. It's an Old West full of a fascinating take on various cryptids and those who hunt them.

It's a book of monsters and also a book of hart (see what I did there? No? The Hart Foundation? Brett the Hitman? Leave me alone.)  But seriously, there're some real feels in here.

You will not be disappointed.