On Joyland by Stephen King - REVIEW 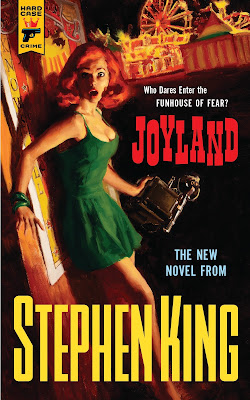 "I love crime, I love mysteries, and I love ghosts," says Stephen King, who has combined these elements into a wonderful new story.  Joyland is a whodunit noir crime novel and a haunting ghost story set in the world of an amusement park.

It tells the story of the summer in which college student Devin Jones comes to work as a "carny" in small-town North Carolina and has to confront the legacy of a vicious murder, the fate of a dying child, and the way both will change his life forever.  It is also a wonderful coming-of-age novel about friendship, loss, and your first heartbreak.  Who dares enter the funhouse of fear?

I fell victim to assumption by association with this novel.  Without reading the synopsis, I had filed Joyland amongst the other Horror novels I had read on my Goodreads shelves.  Approximately 50% through the story (which will be completed before this post is officially made public), and having now read the synopsis, I am fed the realization that an author is capable of leaving the safehaven of the genre that made them.  This is not horror; there are no possessed rides, no alien mindgames, no globally devasting disease to wipe out 90% of the population.  The last thing I expected when picking up a new Stephen King novel was a bildungsroman, but murder and ghost aside, that is exactly what Joyland is, the coming-of-age of Devin Jones as told by elder Devin Jones.

I appreciate the gimmick with Joyland (though I beg other authors to avoid following suit for my own selfish reasonings), wherein Stephen King, who having grown up enjoying the pulp crime paperbacks, decided to give his readers the same feeling of nostalgia.  Joyland is set in a small-town amusement park in the 70's, with possibly psychic fortune tellers, quirky characters, mysogyny, and an unsolved crime resulting in a truly haunted house ride.  To further achieve the sentiment, King decided that Joyland will only be available in paperback form - no hardcover, no e-book.  I've grown to love my e-books (as well as the space and money savings that come with), but the gimmick works for Joyland (King did it, if everyone else could bereave the missed opportunity and skip the copycat gimmickery, that'd be great).  Even the cover art to the book is perfect. 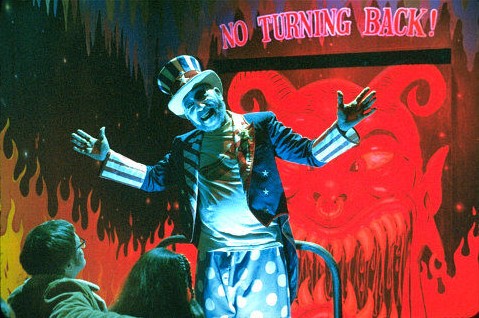 The story is truly a coming-of-age tale.  The Stephen King factor involves a backdrop of creepiness in the possibility of the supernatural, the possibility of danger, the possibility that life and death are more complicated than can be perceived.  A large percentage of the book has no real supernatural element and no real antagonist.  It is akin to sitting down for a cup of coffee with Mr. Jones to discuss the good old days - when your heart was broken, that one ridiculous job you had, the quirky characters you had to interact with, the strangeness of what you would do for a few bucks over the summer, the friends you made, the older woman, and how you learned to appreciate life.  The storytelling style as present-day Devin narrates the tale makes the story flow quickly and ties in all the revelation that experience brings.  It isn't until the end where the story becomes Stephen's King-dom.  I'll avoid getting spoilery, but the supernatural picks up, the murder case takes center stage, and life and death hang in the balance (but at no point is there that really? moment like when you learned about the cause of the disturbance in Under the Dome).

This is what Stephen King does best.  He takes well developed characters, ordinary situations, and turns them into something extraordinary.
Posted by Douglas at 10:58 PM