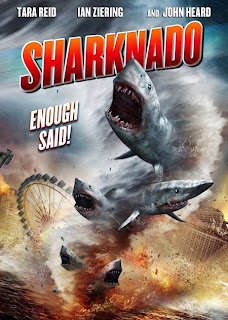 LionEyes and I decided to forego renting a new movie for the evening from one of those boxes the color of red that have sprung up in just about any supermarket these days, chancing that we would find something watchable on TV.  Upon CrabCake's and Peanut's bedtimes we did a thorough channel scan.  Over 1,000 channels of nothing we want to watch.  One channel was showing the third X-Men flick, but I just had no interest in re-watching that ("I'm the Juggernaut, bitch!" /sigh).  But, alas, a current of hope in an ocean of despair - Sharknado would be on in an hour.

I had missed the initial airing of Sharknado on Syfy (I still hate the changed channel name - Syfy), but had marked my calendar for August 22nd (when I thought a subsequent airing would take place based on review of The Guide).  So I set the DVR to record, reading until a half an hour or so past the show's start-time (need that commercial fast-forward ability).  We grabbed some nachos, some salsa verde, and readied ourselves for the bad.

Sharknado was everything I expected it to be.  Completely over-the-top, relentless shark action, inconsistent (at best) filmography, horrendous CGI, and one-note characters.  But, there's a sharknado - no, there's three sharknados!  And what better defense against airborne sharks than a chainsaw?! 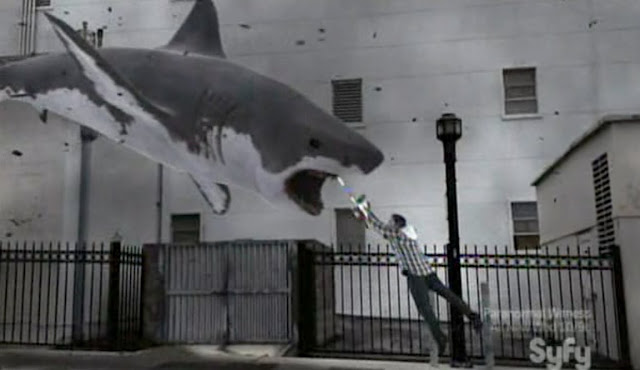 The sky would be dark, cloudy, rainy, one moment, and when cut to the next character in the dialogue, the backdrop would be bright and sunny.  LE commented on this and my only thought was - there are sharks in the streets, flying through the air, and this is what bothers you?  Water depths would have half submerged a school bus in one scene, but cars and SUVs are driving by the next.  Sharks swimming in the streets attacking the moving vehicles. 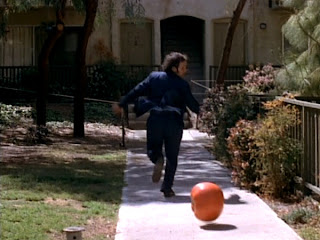 I'm not painting the best picture.  If you're going to watch a movie named Sharknado, you likely know what you're getting yourself into.  And I've stated in previous entries that the best campy movies are the ones that have no intention of being taken seriously.  Sharknado fits this perfectly.  The action is non-stop.  The sharks are ridiculous.  Hell, the plan to resolve the situation (spoiler warning) to use a helicopter to drop bombs into the sharknados is complete nonsense.  Continuing in spoiler territory - the scene posted above - Fin (yes, the main character's name is Fin) is swallowed by the pictured shark, only to cut his way out of it with the chainsaw.  And guess what, this is the same shark that swallowed his maybe girlfriend earlier, and she's ok.  How can you do anything but laugh?

To add to the viewing pleasure, during the re-airing of Sharknado, SyFy streamed in various places, the tweets of fans as a contest to name the forthcoming sequel.  The puns flew as people suggested The Jawsey Shore, etc.  One request was for Sharks on a Train (further requesting Samuel L. Jackson as star).  I opted to go a different route, and followed in SyFy's own path of pitting abnormal aquatic beasts against each other and suggested Sharknado vs. Crocaquake.

Make it happen SyFy Movies.
Posted by Douglas at 2:23 PM