On the A - Z Reading Survey 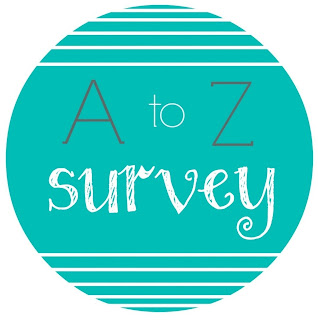 Ok, I'll jump on the bandwagon.  This meme was created by Jamie over at The Perpetual Page-Turner. Who doesn't love a good list?

Author you've read the most books from:
School-related, the easy answer is William Shakespeare.  Since I majored in English (had to be so contrarian to what was expected of me, only to end up back in the business world...  on the plus side, it was the English degree that led me to my wife).  Based on Goodreads, the answer would be GRRM.  It's likely that Stephen King wins this though, since those books were mostly read before my Goodreads days.

Best sequel ever:
Does it count if I say A Storm of Swords?  It's a sequel to the sequel.  Or maybe The Wise Man's Fear. That'd be a tough choice to make.  Both fantasy, yet completely different from each other.  I choose both.

Currently Reading:
The Way of Shadows by Brent Weeks.

Drink of choice while reading:
This is going to make me sound boring.  I'm going to have to go with water.  Unless it's the morning, then it's coffee.

E-reader or physical book:
There's nothing like the weight, feel, smell, etc. of a book.  However, I wouldn't trade my nook for anything (except maybe a Kindle if B&N ends up going the way of the dodo).

Fictional character you probably would have dated in high school:
Lena Greenwood from the Magic Ex Libris series by Jim Hines.

Glad you gave this book a chance:
Libriomancer (book one of Magic Ex Libris) by Jim C. Hines.  Based on the cover, I never would have picked this book up (yes, I'm one of those people).  But after a glowing recommendation from Patrick Rothfuss, I decided to give it a go, and it was some good fun.

Hidden gem book:
The Six Gun Tarot by R.S. Belcher
Belcher crafts a tale that is cliche and yet unique.  It takes a premise that has been used time and again - small town of down-on-their-luck individuals group together to defeat a greater evil - yet changes it with the addition of every fantasy archetype and philosophy.

Important moment in your reading life:
The decision to pick up Bram Stoker's Dracula when it was not part of the high school curriculum.  This was probably the first book I picked up on my own and enjoyed, which created a late love of reading.  This was shortly followed by The Hobbit.

Kind of books you won't read:
I tend to stay away from non-fiction.  Can add straight romance to that list.

Longest book you've read:
I should be able to look this up.  According to Goodreads, A Storm of Swords is 24 pages longer than The Stand.  So, George R.R. Martin's epic tome wins.

Major book hangover because of:
I had to look up "book hangover" in urban dictionary.  Shut it.
I would have to go with Patrick Rothfuss' Kingkiller Chronicles books (The Name of the Wind and The Wise Man's Fear).  Followed by A Song of Ice and Fire by GRRM and The Lightbringer books by Brent Weeks.

Number of bookcases I own:
This one is easy.  0.  None.  Nada.  Nil.  We donated our book collection to the library upon purchase of our e-readers.  No need for bookcases anymore.  Though technically, our daughter has built-in book cases in her room, which holds a ton of children's books.  Does that count?

One book you had to read multiple times:
I suppose classwork is omitted, otherwise Hamlet would be the book I've read the most.  Leaving schoolwork aside, the only book I can think of that I read multiple times so far is The Hitchhiker's Guide to the Galaxy by Douglas Adams.  I will reread books four and five of A Song of Ice and Fire prior to the release of The Winds of Winter.

Preferred place to read:
Couch.  Don't get me wrong, I love reading in bed.  However, once in bed, my body just shuts down, which means I don't get too far into whatever I'm reading.

Quote that inspires you / gives you all the feels from a book you've read:
Honestly, nothing really stands out without my having to look back at things.  The most recent quote I highlighted was:

"Violence is what people do when they run out of good ideas.  It's attractive because it's simple, it's direct, it's almost always available as an option.  When you can't think of a good rebuttal for your opponent's argument, you can always punch them in the face." James S.A. Corey - Abaddon's Gate

I've read other books since then and found quotes I liked, but didn't actually write them down.  So, this will have to stand.

Reading regret:
NOS4A2 by Joe Hill made me sad in that it didn't live up to Heart Shaped Box or Horns.  But it wasn't AWFUL.  The worst book I've read recently (though this is going back to last year) was Damned by Chuck Palahniuk.  Book was all shock value and no story.  And supposedly he's writing a sequel.

Series you started and need to finish (all books are out in the series):
That qualifier at the end essentially eliminates everything except the Night Angel series (by Brent Weeks) that I just started.

Three of your all time favorite books:
The Name of the Wind - Patrick Rothfuss
The Hitchhiker's Guide to the Galaxy - Douglas Adams
The Catcher in the Rye - J.D. Salinger

Others too, but wanted to pick three that are very different from each other.

Unapologetic fanboy for:
I suppose "unapologetic" is supposed to imply that most people would not necessarily agree.  I would have to go with the Timothy Zahn Star Wars books - The Thrawn trilogy.  Not that anyone would say they're bad, but there's probably a little stigma attached to reading further into the Star Wars universe.  Or maybe I'm wrong and that's a bad choice.

Very excited for this release more than others:
The Doors of Stone (book three in the Kingkiller Chronicles) by Patrick Rothfuss.

X marks the spot: Start at the top left of your bookshelf and pick the 27th book:
Based on my bookshelf comment earlier, it would probably be something like If You Give A Mouse A Cookie.  Instead I will instead use the 27th book down on my "Read" list on Goodreads:  The Lies of Locke Lamora by Scott Lynch.  Ooh, and book three in that series is coming out soon!

Your latest book purchase:
Codex Born by Jim C Hines.  My next purchase will likely be The Republic of Thieves (Gentleman Bastards #3) by Scott Lynch.

Zzz-snatcher book (last book that kept you up way too late):
Maybe one of the Lightbringer books by Brent Weeks.  It's rare that a book will keep me up too late.  Especially if I'm reading in bed.  I'm more likely to fall asleep with nook in hand.