On Skinner by Charlie Huston 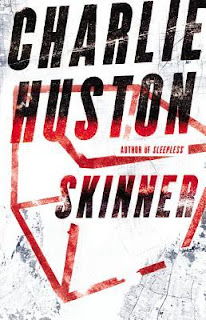 Skinner founded his career in "asset protection" on fear. To touch anyone under his protection was to invite destruction. A savagely effective methodology, until Skinner's CIA handlers began to fear him as much as his enemies did and banished him to the hinterlands of the intelligence community.

Now, an ornate and evolving cyber-terrorist attack is about to end that long exile. His asset is Jae, a roboticist with a gift for seeing the underlying systems violently shaping a new era of global guerrilla warfare.

At the root of it all is a young boy, the innocent seed of a plot grown in the slums of Mumbai. Brought to flower, that plot will tip the balance of world power in a perilous new direction.

A combination of Le Carre spycraft with Stephenson techno-philosophy from the novelist hailed by the Washington Post as "the voice of twenty-first century crime fiction," SKINNER is Charlie Huston's masterpiece--a new kind of thriller for a new kind of world.

LionEyes and I honeymooned in Walt Disney World, staying at the Animal Kingdom Lodge.  Most people remember their stay at a Disney resort based on the rides, the characters, the sounds and setting. Our experience was culinary, with every restaurant stop hand-picked months in advance.  One of those restaurants was Victoria & Alberts, a formal seven-course meal, $135 per person (an additional $65 with wine pairings).  The food was out of this world.  A meal might consist of:

Looks delicious, no?  You see, there is one course in there, the halibut, that simply didn't work for me.  I do my best to appreciate seafood these days, trying not to place any food biases in the children, not to mention the health benefits.  However, back then I just didn't care for seafood.

Which brings me to Skinner.  Skinner would make a fantastic movie.  The characters are engaging and quirky.  The plot is a modern technological thriller - spy vs. spy vs. spy and the effects of facebook and twitter and news 24/7.  This is a delicious seven-course meal, however, there was a fish dish in here, and for me that was the style of writing.  Huston writes as if a train of thought.  A character is thinking of what to say or emphasizing their point then maybe.  They.  Talk.  Like.  This.

"I didn't understand it.  I still don't.  I wasn't human.  Raised in a box.  Copying behavior.  Inhuman.  Inhumane.  Very little differentiation.  Killing people.  Well.  I was a monster."

"No, this has not happened before.
"What has happened before are any number of things that feel similar.
"9/11.  The Invasion of Iraq and Afghanistan.  London subway bombings.  Bombay attack.  Madrid bombings.  Asian tsunami.  European heat wave.  Darfur.  Somali pirates..." 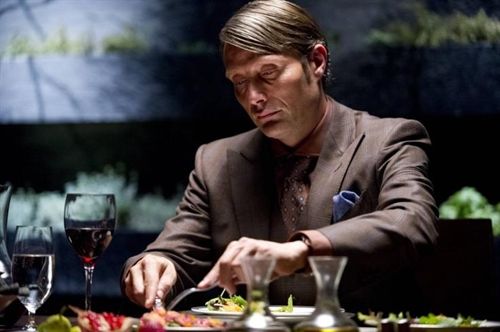 And so how do you rate a book as such?  A book that has everything you want, but is just told in a manner that you find unappealing?  On Goodreads I went with three stars - "liked it" in Goodreads speak.  However this has potential for a better movie - fantasy casting:  Liev Schreiber as Skinner and Claire Danes channeling her craziest Carrie Mathison as Jae.  Make it happen!

Skinner was The Wolverine; a good story suffering from the manner in which it is told.
Posted by Douglas at 8:23 PM